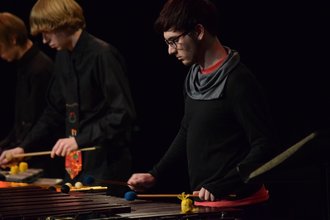 Percussion Ensemble is offered to students who wish to enhance their percussion performance abilities, be a part of a team atmosphere, as well as having the opportunity to perform in a number of public situations. The intent of the course is to provide a quality atmosphere for upcoming and existing percussionists who have previously participated in band. However, a student who has not previously been a part of the band program may enroll in this course if accepted through an audition process with Mr. Orkisz. The audition process is necessary to ensure that all students enrolling in this course will be able to succeed. Students wishing to audition will be required to read music and may need to purchase a minimal amount of equipment (sticks, stick bag, etc.).

This course is not to be taken in addition to the Marching Winds / Wind Ensemble class. Students in the Percussion Ensemble class will be considered part of the “band” and will participate in all band related activities. Although the Percussion Ensemble course will be held at a separate time than that of the Marching Winds / Wind Ensemble class, students will work on literature which will be performed along with the winds at all performances. In addition to preparing full band literature, the course will emphasize percussion technique on all instruments from marimba to the drum set along with an opportunity to prepare quality percussion ensemble literature.

Students enrolled in this class are required to participate in marching band during the eight-week football season beginning in August. The marching band performs at home football games, the homecoming parade, as well as district festival(s). Students who wish to participate in varsity football, cheerleading, or the dance team are able to do both. Varsity football players will not be required to perform at halftime, but will be expected to perform at both the district festival contest as well as other festivals throughout the season. Cheerleaders and Dance Team members will perform at all functions whenever possible. In addition to performances, the marching band will rehearse one day a week after school for two hours. Finally, there will be a “Band Camp” prior to the start of school. All members must be in attendance to the camp as well as the after school rehearsals. Failure to attend rehearsals or band camp may result in the lowering of the students’ grade or impact the participation in the marching show. If conflicts arise with other school related function, i.e. sports, it is expected that a compromise will be made with both the band and the conflicting activity.

Once marching season is over the focus will be placed on serious concert and percussion ensemble literature. Students are encouraged to expand their musical knowledge through participation in private lessons, district and state solo and ensemble festivals, honor bands, summer camps, school functions, and other community events.

Students may earn a letter for band by maintaining a 2.25 GPA or better, participating at all concerts and required rehearsals, as well as district solo and ensemble festival for a total of two years.

Because of the nature of this course, students should plan to participate for a full year, two credits, when signing up.